As I noted in my prior blog entry, after arriving in Beijing on the bullet train late on Friday afternoon, I took a taxi to my hotel.  I had arranged through Beijing Urban Adventures ( http://www.beijingurbanadventures.com ) for custom bicycle tours of Beijing on both Saturday and Sunday, as well as a Beer and Wine tour on Saturday evening.  The meeting place for each of these tours was the entrance to a subway station in the center of Beijing.

I woke up Saturday morning ate a fine buffet breakfast at the hotel (included in the room price) and took a taxi to the subway station that was meet-up spot for the bicycle tour.

A note on taking a taxi in Beijing...

While one might like to believe that taxi drivers everywhere speak english because it seems like it would be to their economic advantage, such a belief is ill-founded.

I anticipated that possibility so, prior to leaving on my trip, I printed on small strips of paper, Mandarin-language versions of the addresses for my hotel as well as the meetup locations for my tours.  When I entered the taxi, I gave the driver the paper with my desired destination and all was well.

Here is a photo me at the subway entrance: At the designated meetup time the tour guide, "Lily", emerged from the depths of the subway and seemed to have no problem identifying the person who didn't really fit in - me!  Lily led me to a local bicycle shop where we were assigned two rental bikes for the tour and we were off to the Forbidden City!  Here is a photo of Lily, and then of me as we began our tour, just outside of the Forbidden City: 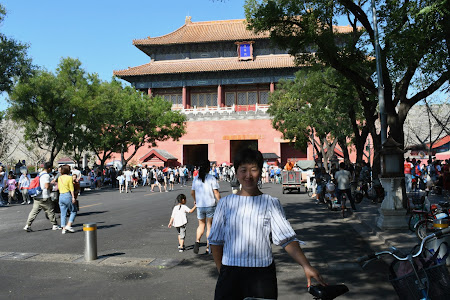 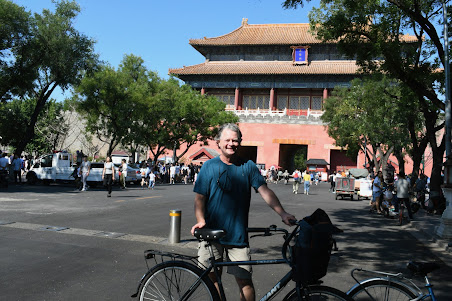 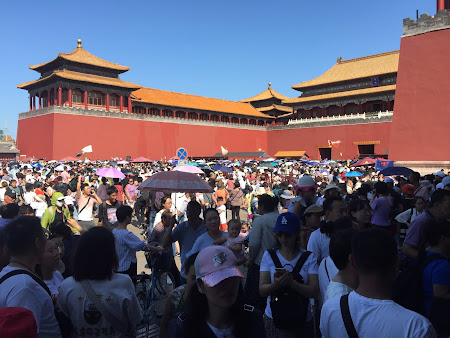 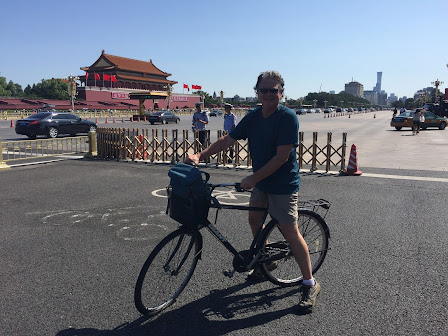 We additionally visited a public square between the bell towers that in times past tolled in the day each morning and tolled out the day each evening.  It was in this square that I saw this group playing a game called Jiangxi (pronounced gee-on-see):
After this, we made our way back to the bike shop, returned our bikes and parted ways until later in the day when we would meet up again for the Beer and Wine Tour.
Here is a video visualization of my first day of Biking in Beijing based on the GPS log of my ride:

After the bike tour, I retired back to my hotel for a rest and then headed out again to meet Lily for the Beer and Wine tour.  We visited a small wine bar and sampled some excellent rice wine.  Prior to this experience, I never knew that rice wines, like their cousins made from grapes, have nuances and varieties but they do!
From there we walked through some back streets to a craft brew pub!  Here is a short video of the inside of that pub, which looks like the inside of about every other craft brew pub in the world - ha!
Next up: Day 2 of bike riding in Beijing - through the hutong!