Like my first day of bicycle touring in Beijing, I met my guide at the subway station.  Today, my guide was "Emma" whose Chinese name is Xing Xing meaning "stars".  Here is a photo of us at the bike shop with our bikes: 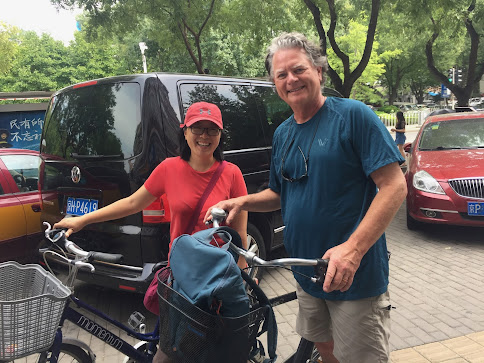 My second day of Bicycling in Beijing was mostly through the back streets and alleys that make up the Beijing Hutong.

What is a Hutong?

The Beijing Hutong is best described as a group of old, extensive, largely self-contained, multi-generational neighborhoods.  Some are quite old - some of the Hutong originate as far back as the Yuan dynasty (from 1267 CE -1369 CE) but some newer ones might have originated as late as 1908.

There is a good case to be made that the Hutong is the kernel of old Bejing's folk culture. The Hutong is where entire generations were born, lived and died.  Inter-family friendships and rivalries, once established, might last generations, decades or centuries into the future.

Here is a video of riding through a more affluent Hutong - likely containing the homes of government officials or military officers.  The ride ends at the Hutong Museum.

The Beijing Hutong once made up huge segments of Beijing; in old Beijing the Hutong were said to be "as many as the hairs on an Ox". As the city has grown and become more modern,  much of the Hutong has been destroyed and replaced with office buildings or businesses.  This destruction has been slowed some by a realization by urban planners that the Hutong makes up a vital, historical link to old Beijing and Chinese culture.  Subsequently, some portions of the Hutong are now protected by Chinese conservation  law.

The Hutong is truly a labyrinthine network of narrow streets and alleys that wind through these self-contained neighborhoods.  It is quite easy to get turned around and lose track of where you are.  Emma noted that there is a saying related to this;  when one has become hopelessly lost, turned around, and confused they are said to be "lost in the Hutong".

Many times during the tour, we would be riding through a Hutong to get to a connecting street and we would encounter a wall at the end of the street with no way around it.  Emma noted that there is another saying corresponding to this; when someone finds that they are a dead-end or blocked from moving forward (either physically or figuratively) they are said to have "come to the end of the Hutong."

Here is a short video of riding through another Hutong, not quite as affluent as the earlier one, in the heart of Beijing:

You can read more about the Beijing Hutong here.
Beyond the Hutong on this second day of bicycling, we toured the old "Peking University" museum.
Here is a photo looking down the hall toward the library at Peking University Museum: 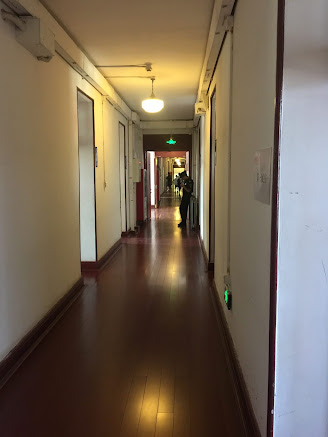 It was at the library down this hall in Peking University that in 1918 a young librarian came to work and fell under the influence of a circle of radical intellectuals, principally Chen Duxiu, then Dean of the University, and Librarian Li Dazhao.
The latter two became founders of the Chinese Communist Party.  The name of their young librarian disciple was Mao Zedong.
Our final stop was the Beijing Urban Museum, which was not my favorite.  Here is a photo of Emma and me outside the museum: 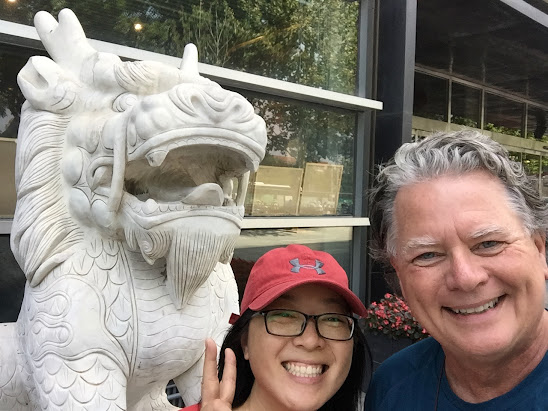 From the Urban Museum, we rode back to the bike shop and turned in our bikes.

A note on riding bicycles in Beijing:
Many might think that with 12 million people and 13 million bicycles (https://www.cbsnews.com/news/there-are-9-million-stolen-bicycles-in-beijing/) and who knows how many cars, that riding through the streets of Beijing would be hazardous.  I found that the bicycle and vehicle traffic wasn't the problem as long as I kept my speed under control and my head "on a swivel".  The most hazardous thing about riding a bicycle in Beijing is the same as any other city: Pedestrians looking at their phones and not paying attention to anything else! As anywhere, these entranced pedestrians will walk out in the street in front of you and, in many cases, will not even be aware of the braking and swerving required to avoid plowing into them.  Beware of the pedestrians!

Here is a visualization of my second day of bicycle riding in Beijing based on the GPS log of my ride:
Many thanks to Beijing Urban Adventures and their wonderful guides for two days of thoroughly safe and enjoyable bicycle touring in Beijing!
I leave you with the song Nine Million Bicycles in Beijing!
Next up: Two days of hiking on a remote section of the Great Wall!
No comments: